As everyone knows, we at the Barco Sin Vela/Wildebeest III gave up the idea of having offspring, long ago.

Instead, we are infested with Siamese Cats. (Hyacinth lives in her own room and stays weekends on the boat. Tough life)

Mali and Saffy are not quite right in the head. They were barely rescued from being feral, and they still aren't too sure about us humans. 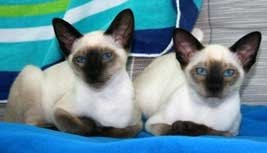 They are not quite there... 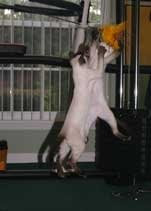 Mali loves men in general, and Me and Roger (Beaujolais) in particular. Saffy just follows around, keeping a close eye on her obsessive compulsive sister.

Mali is on the left: 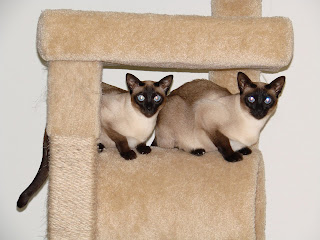 Night time is a time where all Siamese Cats posture and carve out a roosting place for snoozing. Mali will tuck in next to me and Mao will strike out on his own. Saffy likes to be near Mao.

About 0400, this morning; There was an odd sound coming from the kitchen. The Spousal Unit was the first to be annoyed, so she got up to investigate. I rolled over for forty more winks.

The sound was of a plate being pushed around on the floor tiles.

Saffy (Better known as the Genus; Shove-a-lup-i-cus) was shoving a plate around trying to get to the food that had once been there. 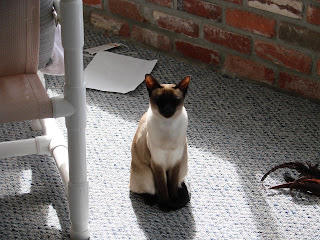 Teenage kids might be ok, if trained well they can be useful and bring comfort.

But Siamese Cats don't have thumbs, so they can't steal your credit cards and go on a wild spending spree to the Leftcoast.

And they have ways of making sure that we know who is the boss.

heh. I take a great deal of pleasure in reading other people's tales of pet life. Although I DO miss my puppehs. Greatly.

I like pups, too. But a dog really requires daily attention whereas cats only need us for opening cans of tuna.