Sorry for the absence, I was detained elsewhere 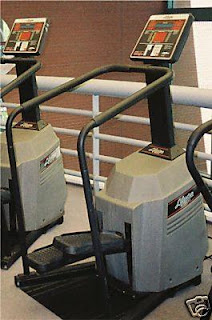 It has been a busy past five days. There has been house cleaning, gym additions and other such stuff that just happens on this crazy rock and roll road show we call life.

Friday, I went to Orlando to pick up a Lifestep 9500 Stair Climbing machine. I got it on Ebay for a couple hundred, which seemed a good price considering most of the other 9500's were priced at five hundred bucks above mine. Plus add in a couple bills for delivery, well, you get the idea.

It seems that I have been inflating like a life raft over the past ten years of being away from the Service, and I really want to drop 23 pounds before I go on vacation to California. Back in the bad ole Navy days, these Lifestep 9500's were in every gym, on every ship. I would do an hour a day and would find that all my tonnage concerns would naturally (without dieting) go away. I could pound beer after beer, sandwich after sandwich, and keep relatively svelte.

I drove down to Orlando, about two and a half hours, found the address and backed up to the house of the guy selling the machine. He wanted to know if I wanted a Bowflex for another five hundred. Seems he was eliminating all his exercise gear.

"No thanks, just the Lifestep", I say.

We heaved it up into the truck and I was away.

Home was another problem. Seems I have no friends whenever there is heavy work, so I slide the machine onto the grass using the device as a lever against the cargo door. I then dragged it to the front door of the house, thankfully finding that there was about two inches to spare on the entry way. I hoped that I could just muscle the machine past the hall door but found myself hopelessly stuck half way in.

I extricate myself slowly past the stuck machine, conveniently laying sideways and into the drywall. I climb over, walk to the other side of the house and find my tool box, grab a bag of wrenches and walk the hundred feet back to the sprawling behemoth. Once there, I curse, and walk all the way back to find allen wrenches.

And trek all the way back to the rear hall. Pause, then return to the tool box for a measuring tape.

Who says you need an exercise machine to get your cardio in?

I remove the foot pads. Still stuck. I remove the electronic box on top and then the hand rails. Some of the allen screws were really stuck, they may have never been removed since manufacture, which was prolly back in '93. Good thing I had some rust blaster in the under the sink storage pile.

So, now everything is off so I drags me macheen on it's side into the gym.

About five and a half feet away.

This is the week about small steps and giant leaps, right?

Now I get to put it all back together. And I did not have any extra parts left over!

Normally, I have extra nuts and bolts and whatever it is is no longer what it was.

The Spousal Unit comes home and is not impressed by my accomplishments. Oh no. She wants to know why there is no scent of clean kitchen wafting through the house? Why is dinner delayed? Where is my wine?

Important questions, for sure.

"But look at your beautiful gym", says I. 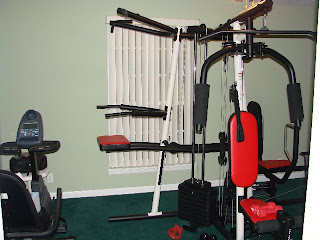 "I am hungry and want to know what dinner will be." Pronounceth She.

So the Gym is now in commission, and I can say that I think the 23 pounds of ballast shall be removed by October.

Here is some views of the gear and the fauna that also inhabit the locale;

Mao is an interested cat, walking by a Grateful Dead CD. Him likes "Truckin' " and "Sugar Magnolia". But then, so does everyone. I like the other disc with "St Stephen", "Jack Straw" and "Me and My Uncle". 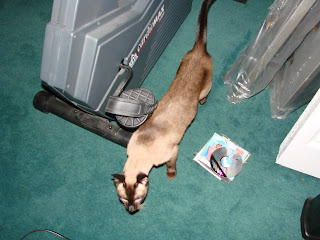 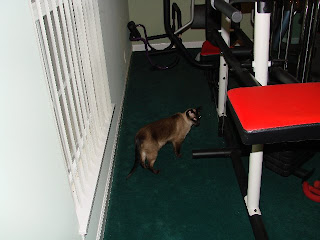 Hyacinth wants to learn what the fuss is about: 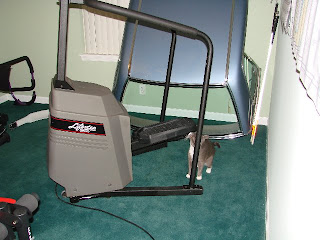 This weekend, I got in some parts and goodies. First; We got our two Lucas ignition switches for the Perkins Diesels. I made sure to take a couple pictures to ensure I got the wiring right. They are four position switches, I had to order from the UK. The place in Washington State wanted 70 bucks apiece. I got two from the Manufacturer for a hundred bucks.

An icon from the demon "Lucas": 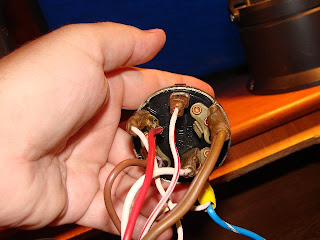 These will get installed in next day or two.

We had our macerator pump repaired and a new Sony stereo installed, too. They work great. I will thank "Nick", tomorrow. With my check book.

Speaking of Nick, the Yacht club dockmaster called me this afternoon, asked me if I had a maintenance guy doing work on the Barco.

"Did you know he is drinking and smells like he has been drinking all day?" Said Todd the Dock Master.

"It's bad for liability and we don't tolerate this behavior..."

Did I not mention that it really is always something?

We will talk about this, tomorrow, too. No big deal.

Before I go, I want to point out silly purchase of the month:

From Mre Depot, a place for thrifty survivalists (Like Me!) 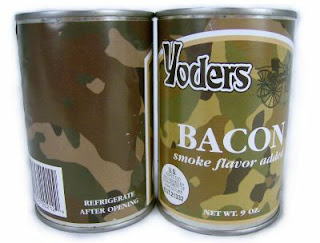 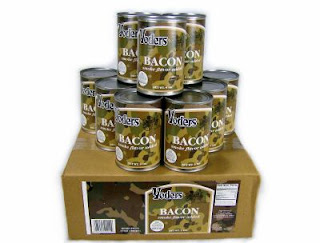 I got the idea from a link at "Ace of Spades". I have not seen canned bacon in years, and I thought I would get some for "Beaujolais" (Roger and Janice). Plus, with a ten year shelf life, I can leave this on the Barco.

It tastes fine, if you heat in a pan. Great for "Bults". There are 54 slices in a can, already cooked.

Speaking of the "Dead", now some Hippy Tuneage:

I am sorry to admit that I was a bit glad to see that you have some weight to take off... I read the posts of the steak and wine and champagne and port and cheese and then see photos of you and the Mrs. and neither of you weigh 900 pounds which I surely would if I portook as my imaginings have you doing from the writing :)!

And yes, it is always something. My favorite "line" from a consulting manual I once read: "Once you solve problem #1, problem #2 becomes problem #1".

The Spousal Unit is still quite svelte, but I am getting quite "fluffy".

This is day two of the new program, no beer, sensible food and exercising twice a day. I spend 24 minutes on the Life Step and we still do our 45 minute walks.

Have fun up there!

Him likes "Truckin' " and "Sugar Magnolia".

What? No "China Cat Sunflower?" :D

"Prince of Darkness." I used to carry a spare rectifier under the seat of my Ol' 500cc Turnip... they had a nasty habit of popping on the darkest of nights. Of course.

Nice gym. Colorful. I don't have that excess poundage problema and thus avoid unnecessary heavy breathing. But Good On YOU, Darryl. :D

Things sort of get in the way of blogging.

Since I have advanced in age I have notice my ballast seems harder to shed.

Good luck with yours.

Ballast is real pain. The cats look great as does the exercise area! Bacon in a can? My Dad bought some back in the early 1960's. I think it came from Denmark and it was salty as hell.

Thanks, USA and Gene.
That bacon from the 60's was indeed, salty as hell. I think it had to be refrigerated too.

The Yoder's Bacon is not very salty but cooks up crispy if you put it in a pan. There is hardly any fat, which is a great bonus.

But you pay about eleven bucks for 9 Oz of bacon, cooked. They claim that each can has 2.5 pounds of raw bacon, which I could believe. There is an endless amount on the plate.