We moved the boat at about 0400, got underway for London. As we were preparing to go, Tom and his crew were up, too. Only Tom had fallen into the cockpit of Gallivant the night before, shattering his right wrist. He came up hung over and in pain, the Spousal Unit splinted his wrist so tightly that Tom felt he was able to sail back.

Gallivant had a good crew so we left them to their sailing, we had our own adventure ahead. Gallivant got home with no issues.

Don UFO left when we did, the Pigeon Sisters were sullenly in their crew attire ready for the journey, while Roger was looking a little tired from going out Sunday and staying late.

This story comes out later about Don UFO's trip; Roger gave the Pigeon Sisters the helm and control of the boat, asking them to maintain a Northwesterly course while he took a little nap. When he awoke somewhat refreshed, he discovered that the girls had steered the boat on a SOUTH Westerly course and that they were on the way to Cherbourg! I guess they didn't know which way the sun rises, and all that. We had such a howl laughing about that trip.

The Sisters were never allowed near the helm again.

For that matter, they soon vanished from the club.

I guess Wildebeest and Don UFO were rough on crew.

We were sailing to the Northwest and I went below for a snooze.
About an hour or two later, I could hear some arguing, as Spousal Unit was telling Rich to head to the right to avoid the Goodwin Sands. Rich was saying no, we were on a good course.

Was I going to have to come out there with the belt?

I had to come up and take the helm. A few minutes later, I pointed to a berm of beach that appeared in the middle of the Channel and said, "Goodwin Sands; Graveyard of the Channel."

We skirted to the East of the sands and headed for the Estuary. We caught the tides perfectly and were moving about ten knots over the ground with fair winds and nice sunny skies. Before we knew it, we found ouselves circling St Katherine's Dock waiting for a lock in.

Secured the Wildebeest at our dock on the East Basin by 1730, a great weekend was had by all.

The biggest lesson learned was that Wildebeest was a fine sailing boat that could take a big pounding in the ocean and keep her crew safe and dry. Another thing was the confidence was building for the big trip that was going to be inevitable, the trip home.

The Crew of Wildebeest now had some serious street cred with the Little Ship Club boating membership. The English Channel is not a smooth lake or river, but a highly congested bit of world class waterway. We were approaching Junior Varsity status as boaters.

I wrote up a article for the Little Ship Magazine chronicling our trip, we won the Alderney Tankard Award for our description of the weekend to Calais. Not too bad.

Another great benefit was we developed a really close relationship with Norman Hummerstone, MBE, FRIN. He became the Grandfather I never had who's knowledge and mentoring made us into better sailors and more importantly safer on the water. He also took an interest in helping my career along. There are some great sea stories coming up about that.

You might ask, "What ever happened to the Calais Twins, after ten years?"

In May of 2007, Roger (Don UFO and Beaujolais) was getting married in Wales and asked us to be there. After arriving in London we knew that Norman would be in Calais for the Rally, so we hopped on the train for Dover hoping to get a hovercraft to Calais.

The Hover craft was a little more pricey, but you get to the other side in about twenty minutes, vice two hours, so it seemed the way to go. We will get there, have lunch and scoot on back to the Little Ship Club, where we were staying. We looked on the internet and saw that Hoverspeed website, and decided to go.

Once we arrived at the Dover Train Station, we hopped into a black cab and asked the driver to take us to the Hovercraft Port.

He looked annoyed and said, "Are you taking the piss on me?"

I was confused. "No, we would like to go to the Hoverspeed Terminal, why?"

"Mate, there hasn't been hovercraft service for the past two years. You have to take the ferry."

We did not notice that it was the stupid Google Cached website of the hoverspeed service.

We went to the ferry terminal, knowing that we were screwed. The next ferry was full so we had to wait another two hours to get underway to Calais. We called Norman and explained the situation, asked if we could stay the night on his boat. He was gracious and said we could, so we had lunch and made our trip across a foggy channel.

Arrived in Calais, took a cab to the Basin Ouest, and found a cheerful Norman at his dock. he invited us aboard and offered some champagne, you wouldn't know we hadn't seen him for eight years. 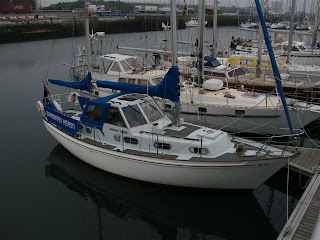 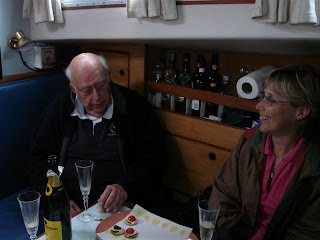 We talked and talked, he said he would have to leave for an appointment, after we finish the bottle.

I mentioned that I had heard that Jean Plancke had passed on and that we were glad to have known him.

"I'm having drinks with him at five o'clock."

So we walked the mile to the club, crossing the old bridge and passing by the Lock and the Harbor. This Gent is 87 years old and walking like a person forty years younger.

Arrived at the Commerce Club, headed up old familiar stairs to the bar, we were greeted by our old friend Dr Jean Plancke, who pretended to remember us from the last century.

We were proud to buy the first two rounds of drinks with these heroes from another, better era. 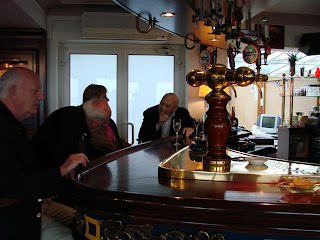 We finished up and said our good-bye's, and took Norman out to eat. Afterwards, we returned to the boat and had Port and Cheese. 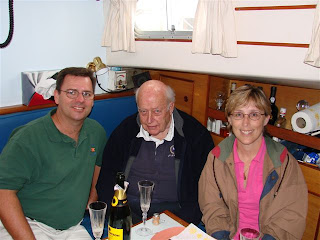 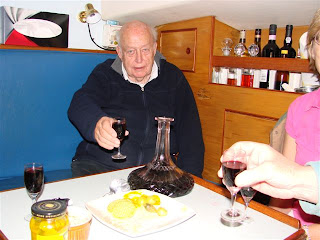 I want you to know that it was now 2100, we had been boozing and eating since 1600. So we start on the Port and Norman wants to watch a film on his portable DVD player.

We polished off the bottle and prepared for bedtime.

What will I need to do to be like Norman when I get another forty years on?

By the way; Did you notice the rack of bottles? 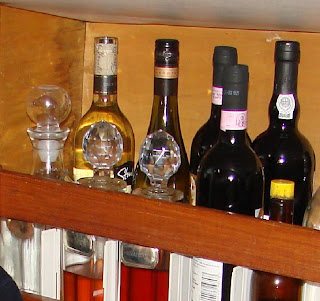 This is just the "Ready Bottle" rack. There are six kinds of Gin, six of Whiskey, both blended and Single Malt, Various Aperitifs and more Port and Champagne in the concealed lockers.

And maybe one bag of crisps and a jar of olives for your dining pleasure.

Norman ROCKS!
Posted by Barco Sin Vela II at 4:03 AM

By the way; Did you notice the rack of bottles?

That I DID... and I also noticed that boaters do the same thing as RVers... with the separators in between the bottles to ensure nothing is lost due to "excess motion."