A Normal Life in London

After we returned form Calais, we were suddenly considered as one of the "Cool Kids". We partied and carried on as if that was what we did in America, not. The Londoner's have this sense of joie de vivre that requires a "Roman" style party for every reason. Holidays, festivals, Friday, it's all good and will require a gathering with everyone dressed in their Sunday best.

If your Sunday happens to be an inauguration into public office, that is.

We found out early June that our friend, Paul Ferris had resigned from the Little Ship Club.

(You forgot to mention the London Rally, Paul hosts that, too.)

Guess who gets invited to fill those big shoes with two weeks notice, who also happens to live in the marina hosting the Little Ship Club London Rally?

So with that bit of depressing news, (Our friend resigning, that is) we prepare for this party. The Rally was for the Fourth of July, that year. So lucky for me I had a three day weekend.

I arrange for dockage for the boats that will be visiting, and I set up a menu for the dinner to be held at the LSC. We decided that dessert would definitely be American style apple pie with an American style crust. Not the dense, thick and chewy British crust, this would be a crust made with shortening like Mom made. The filling was specially made using less sugar and corn starch so that you could taste apple and not gooey paste.

The Catering Staff was quite cross with my heavy handedness, but I told them it's my way or the highway. 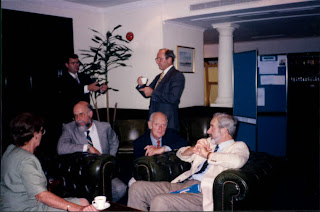 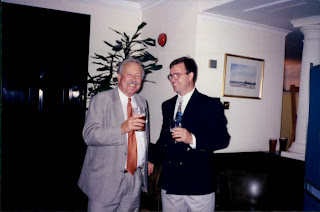 Forget that. The theme of MY Fourth of July Rally was "Independence Day" If you folks want me to do this on such short notice, well, we will need to adjust the rules.

Collared shirts and nice casual for the ladies. The Commodore was fit to be tied.

I met a young person working at the Navy Exchange who claimed to be a free lance DJ, so I offered him a hundred pounds to do the Rally party on Saturday night.

It was all coming together, and we couldn't wait to spring the final surprise; We were going to have a "Tea Party", protesting Taxes and everything else that oppressed us!

The big weekend comes and the first thing that goes wrong is the DJ. This person decides he can't do the gig and does not bother to call me. I call him all day and finally get hold of him an hour before I need to be there and he says he can't come.

Panic in the grey room, NOW!

I run over to a neighbor boat, Cornelius, and ask if I can borrow his stereo, and I invite him to the dinner along with his lovely girl from Sweden. Then we cab the gear to the party.

Commodore's Table behind SWWBO. Notice how we weren't good enough to sit with them. 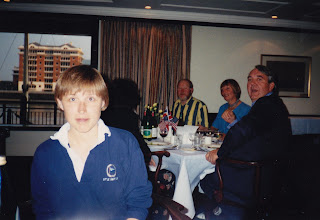 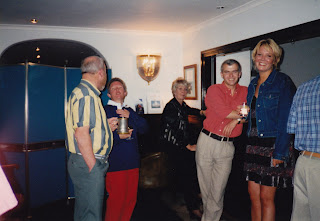 Cornelius is next to Ulrika

About fifty guests are there (way more than I expected, but so many wanted to see us mess up!)

I give a welcome speech which went sort of like this;

The Crew of the Gnu would like to welcome everyone of you to this year's London Rally. We were given the responsibility of doing this on short notice, but we hope that you will enjoy yourselves none the less.

We would especially like to welcome those of you who braved the Mighty Thames River, who dodged flotsam, jetsam and logs bringing their boats safely to St Kat's!

So off to dinner. We had a great meal and the Commodore (Wearing a Cravat because he always wears a tie) Gets up to do the "Loyalty Toast";

"Ladies and Gentlemen, please stand for the Loyalty Toast: "To the Queen.... Coupled with the President of the United States."

There was a nanosecond of uncomfortable silence... "The Queen!"

The laughter broke out almost immediately!

Oh that was precious. President Clinton had just had the news sent around the world that involved the Oval office, a blue dress and some young chick who happens to like cigars.

I chose that moment to give a speech about the Fourth of July, and its meaning to all of us Americans, and to an extent, our British Brethren, who we have so much in common with. This was when I explained the Boston Tea Party and the root of our Rebellion against Taxation Without Representation.

"Now, I would like to invite all of you to come forward, grab a pinch of tea from this tin, and join me in tossing tea into the Thames to protest all that oppresses us."

Just then, I grabbed a hand full of Tea and turned to toss it into the Thames.

The Thames river level had subsided. It was at low tide. The water was about thirty yards away from the Club Dock!

To save face I blurted out, "I see the Thames is a proper, British River, and it will not tolerate any tea party shenanigans!"

Everyone was of good cheer and tossed pinches of tea into the mud and I set to turning the stereo on.

"Barometer Soup" was again the first song to start off the Nautical Themed Dance and the night went on to be quite enjoyable for the hosts and the Club.

The next morning, My good friend Cornelius was good enough to host our Sunday Morning Mimosas and Snacks on his 60 foot sailing Barge, and many of the Rally participants came by to partake and join in on the boating camaraderie.

An added feature was an appearance by the local contingent of the "Swedish Blonde Bikini Team".

Summer was really coming together, nothing like sailing vessels and good friends to make a happy time.

(Pictures in a couple hours, I promise!)
Commodore Hunter Peace and Tom Davey 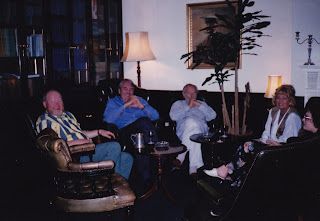 Norman and Debbie and the others from LSC 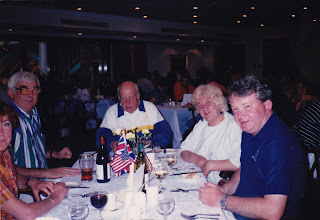 sorry about the double hit earlier. What a maroon! 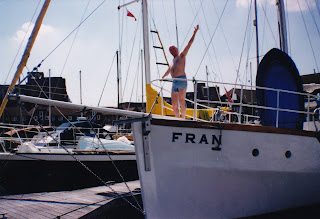 Someone chatting Number One from the Swedish Blonde Bikini Team
(Biggify this picture: That's the Wildebeest about 50 yards behind me. It's infested with Siamese Cats! 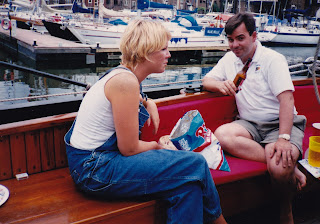 John and Emma from "Fran" (They were very, very kind to us over the years. 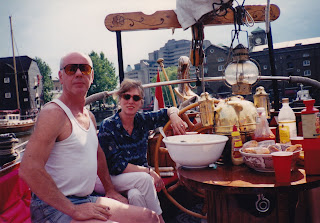 You all are a real hoot! I'm so glad it went so very well for you! My wife has a Korean cousin in Sweden and when she speaks English, she speaks it with a Swedish accent...it's a riot! If I get out your way I will stop by and say hello in person. You have the right stuff whether or not the Brit's make think so. Jolly frickin good!!!

I am also glad it went well! Takes some chutzpah to throw a "tea party" in the 4th in Britain!

Ah... I SO hear you about the Brits and "any excuse to party." That's one of the reasons I had such a great good time in Ol Blighty. I'm lucky I got out with my liver intact.

Well done on the telling. You put us right in the scene with you, and that's a great talent to have!