Saturday was so nice that we decided at 1230 to go boating. We heard that a friend would be at the Crab Shack along with another boat, so we bustered South on the Barco. It was a three hour jaunt with an empty river and 75 degrees of Fahrenheit warmth. What I liked was that everyone was seemingly staying at home because the day had started out cold, approximately 38 degrees in the morning.

There wasn't any wind until we were about to cross the Shands Bridge, the wind began blowing a gentle ten knots from the Southeast. That meant it was breezy for us on the flybridge because we were moving nine knots into it. No big deal, we were soon at Six Mile Creek and tying up to the dock.

We were assisted by the crew of "Nocall" and once secured we prepared for socializing. The evening's plan was for us to visit "Ataraxy" and dine on various snacks. We brought smoked salmon and crackers. Dinner was fabulous, and we chatted until the wee hours of the night. I think we were back aboard Barco at 2130. After a last glass of wine in the quiet of the night we hit the rack by 2200. It was chilly out so I was glad we had warmed the boat with the generator powered heaters.

We were up with the birds at 0700 and enjoyed coffee in the early sunshine. We walked up to the Crab Shack and discovered that they were offering free breakfast. Turns out that Providence Bible Believing Church holds services there at 0900. We ate breakfast and took one of Providence Church's food donation bags back to the Barco and filled it with some of our canned foods for the poor. I dropped it off while the service was in progress. It was nice to see some country folks and bikers all getting their Sunday Church at the Crab Shack.

By the way, if you happen to be in the area on Thanksgiving day, Out back Crabshack is offering free Thanksgiving dinner to all who visit. We complimented the Lady who owns the Crabshack for her wonderful hospitality and expressed our well-wishes for the future. The Crabshack is definitely one of the great destinations for North Florida. 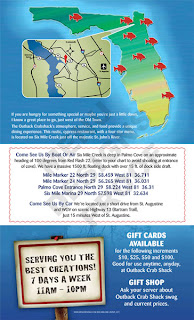 We got underway shortly after 0900 and headed North at about 1400 RPM which gave us 7.5 knots over the ground. We took the following video on the I-Phone. The video file came out looking odd and stretched, so I adjusted the width. Hopefully, it shows ok on the blog.

We were at our home dock at 1230 and called it a weekend.

Have a nice week!

I held the I-Phone in the vertical as I took the images. Should have held it sideways, duh... Eventually I will become proficient in Mac products.
Posted by Barco Sin Vela II at 4:58 AM

The vid was stretched, but not too bad.