We had a wonderful time at the show, despite the hour long traffic jam getting to the parking on base.

We were walking along when we passed the USAA Kiosk and we were approached by an older gent who accused me of having been in the Navy. Turns out that he was a SH-3D/H Pilot who was a past Captain of the Carrier, USS Independence CV-62, out of Yokuska. I surprised him by asking if he remembered his Safety Officer, Buck B.

Well, this was a surprise to my new friend Hardy, and we may have personally met in 1998 in London when he came by for a meeting. I was serving the coffee...

Anyway, Hardy asks if we would accept tickets to the VIP tent (Free food and beer!). I said we would be glad to!

Well, good deals are everywhere! After showing our tickets to the disbelieving armed Navy Security folks who showed us the way in, the reality hit us quickly; We were at the same tent as the CO of the base and his personal guests! We quietly slipped to the back of the small seating area in front of the Blue Angels and grabbed a couple of cokes and really enjoyed the show.

First up was a 1943 Biplane who gave a super performance of skilled airmanship with a 200 horse powered aerial jalopy. Next was a few other nice aircraft who gave a show called, "Ten Sticks of Dynamite". Very loud and smoky. They caught the field adjacent to the runway on fire. TINS.

The Blue Angels started around 2:30. Not much to say, they had to do the low altitude program which is cool to watch but not as fun as the full ten thousand feet show. Oh well, one must endure, mustn't one? 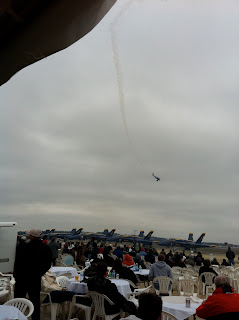 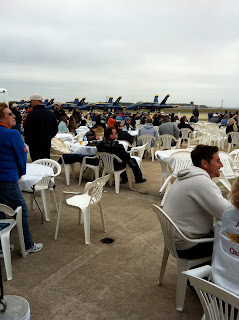 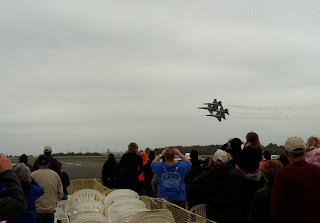 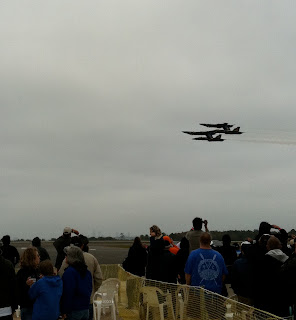 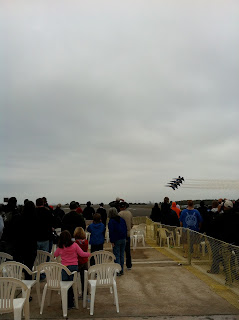 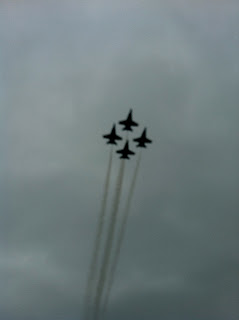 All these photos are from an I phone! She Who Will Be Obeyed had Jedi Photo Skilz today! 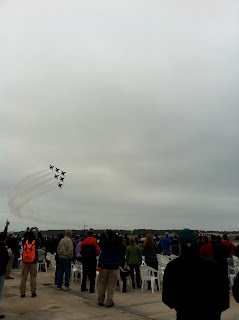 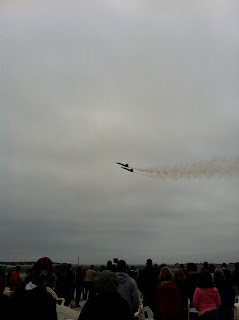 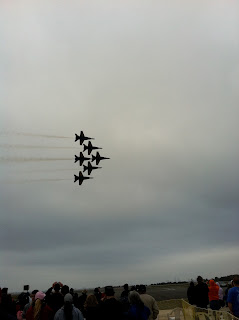 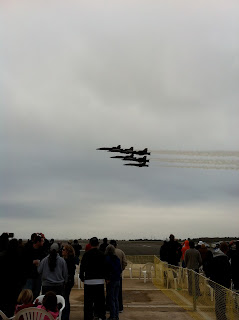 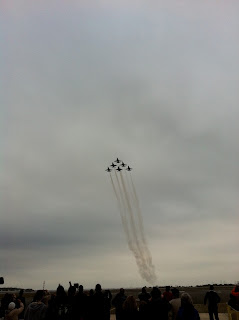 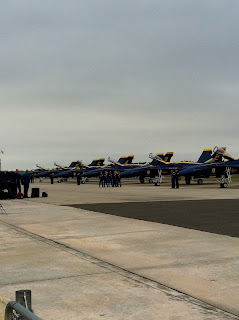 I will get some video put together tomorrow. We had a wonderful time at the show, especially because of the kindness of Hardy Kircher, of USAA. 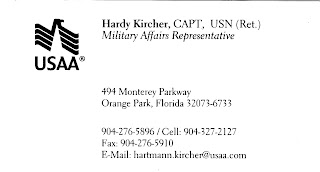 Do your self a favor, if you are a Military Veteran with an Honorable Discharge; Call USAA and get an Auto quote. We have been happy members of USAA since 2000.

Thanks, Hardy! And thanks to USAA for being a part of our great fun today.

Here be the video I promised yesterday. It's a little rough but it gets the gist of what we watched in the cold and windy airshow.

Nice vid. Is it just ME or does the addition of a "soundtrack" take a lot away from the show? The 'Birds are doin' this too and worse: I heard hip-hop as "soundtrack" music in one recent clip I saw. I suppose this is the point where I add the UCR "GOML!"

It's too bad the WX wasn't cooperative but I'm sure that was offset by the presence of a nice tent as a point of refuge, eh? With free beer!

Buck, I agree totally about the crappy music. I would prefer to listen to the roar of the aircraft and maybe a bit of the play by play provided by LT Tickle, of Birmingham Alabama.

Funny enough, I did not drink any of the free beer. I had to do the grip-and-grin with the Base CO. Best behavior and all...

I'm glad I'm NOT alone, re: the music. But I would've had a beer or three, just on GP's. I have an image to uphold and CO's know all about THAT.