On to the next adventure

After all the fun and games of the Frostbite, we settled into our roles in the real world. I went to Landover Maryland for a couple week school in advanced Photoshop and Power Point, taught by the good people of Hughes/TRW (Those that know, know!) where I endured even more snow and learned to make something homemade; called a Bead Window, whatever that is.

Punsters will be punished!

Home to London I went with a very large suitcase filled with Pabst Blue Ribbon beer, about two cases worth, just to share with some of my dockside friends. British Customs laughed when they saw the contents of my bag and threw me out of the airport.

The Little Ship Club has a program that is ongoing called "Skippers and Crews". It enables members without a boat and an interest in sailing the opportunity to be formally introduced to boatowners who are willing to have them aboard. Wildebeest III had several guests over the years, but the first one really stands out. Pictures will come later, I assure...

We met this bonnie Scot's Lass at the Skippers and Crew dinner, she seemed like a real nice person and would possibly fit in. Cute, blonde was she, and she had a nice sense of humor and a genuine desire to sail, but alas, no boat or bucks to acquire one.

No problem said I, we like to sail and would love to offer you a berth on our small boat on a trip to Queenborough and Chatham, this Easter Weekend.

She asked if a vegetarian diet would be a problem, and stupid me, not realizing that there are different kinds of vegetarians, blithely said, "No problem!"

We loaded up the boat with about four cases of wine, six of Grolsch beer, six steaks and the regular foods that we take for a four day trip. Veggies tended to be potatoes, onions, beans, carrots and such.

Blonde girlie shows up with a loaf of bread and a large jar of vegetarian barley and bean soup which was still in the original dry state, requiring about four hours of cooking. Also, a jar of some vile substance resembling peanut butter called, "Nutella".

First of all, anyone who has been paying attention knows that we were a bit worried about the propane cooking situation, and there was not enough onboard for cooking a four hour soup. SO forget that nonsense, right away. I told young lass that we would make sure that when we cooked up fajitas, we would cook up her veggies first, before the meat would be anywhere close to touching the stove.

I considered the issue resolved, and we got underway for Queenborough, Isle of Sheppy. We had about three passengers, Paul Ferris, the Scottish Lady and her friend (Who was there to be moral support but was less trouble;She had no dietary restrictions!)

Queenborough is about 54 miles to the East and is near the entrance to the Medway River. It is a bedroom community to London and has a nice little mooring field and a Pub that passes for a Yacht Club. The charge for mooring was about seven pounds a night, a real bargain. The Queenborough Yacht Club is/was a fabulous place, as we soon found out...

We sailed down river and had a fine breeze following, but once we entered the Estuary/Medway interface we had to start the motor. The solenoid decided that it would show me who was indeed the boss by not starting. The winds also started picking up and it was no longer pleasant. Especially with that sunk Liberty ship a few hundred yards away, in the dark.

No problem seeing the wreck, it was lit up with white and yellow strobes.

You-know-who was sent below with a hammer and wrenches to adjust the cabling on the solenoid. Tightened up the nuts? Check. Including the fun little buzz and spark, (add that into my don't-do-agains).

"Rap the solenoid gently with the hammer", said Paul.

I did and the motor responded by starting. (This would become a routine for the remainder of my ownership, about every third time would require the hammer).

We tentatively entered the Medway, using the Safeway Store Sign as our prominent nav-guide, then we followed the docks closely as there is a East Cardinal pointing the way from the nasty shallows that await bad navigators. We slid up to the Queenborough dock, and tied up. 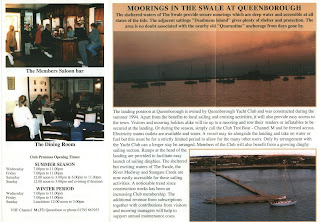 Here is more of the Yachtclub Brochure 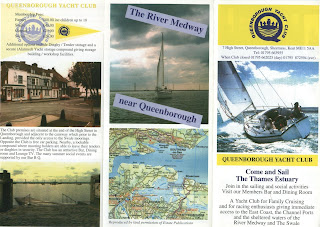 Now, I was completely relying on Paul for local knowledge and customs, so we ted up and walked up to the yacht club. While we were dining and imbibing in wines and ales, another couple of boats came and tied up outside of us.

We returned to the 'Beest at closing time, noticing our new "buddies", and that a very brisk (25 knots!) wind was howling from the West, pushing us into the dock. There was another boat on our outside, but it was seeming to be riding well.

So we hit the hay without further ado.

About 0230 I heard a tremendous crash and breaking sound from the hull by my head! I got up and went outside and noticed that, unbelievably, the winds had grown above forty knots, and the seas were pounding the other boat into us (we were acting like a fender, protecting that other boat!) I started yelling at the crew of that boat telling them to get up and either stop the pounding or get under way.

After everyone calmed down and we had the cuppa tea, the other boat tied on the spring lines that they had neglected to tie on six hours before.

Here is a brief Quote from Suite 101 site:

Adequate Number of Lines - A properly secured vessel will be held by a minimum of four lines, a bow line, two spring lines fore and aft, and a stern line. Spring lines run from the fore and aft ends of the boat to a cleat or bullrail on the float. Picture tying a line to a fitting at the bow of the boat and running it back to a point on the float near the stern of your vessel. Having two spring lines running in opposite directions prevents your boat from moving forward or backward. Lines at the bow and stern prevent the ends of the boat from swinging out away from the dock.

There was the only time I ever forgot to check on another boats lines, particularly if they were rafted off of us, again.

The other Skipper said that he presumed I would ensure his boat was tied correctly!

I didn't know it for five more years; Our boat hull was literally cracked at the point his boat had struck ours, repeatedly in that wind. It didn't look like much more than a scratch, but that is how gelcoat and paint will cover up flaws and damage.

About four hours later, we held reveille and served coffee and pancakes to the crew. Some, namely our British passengers, had never eaten a pancake before!

Then, the Police showed up and kicked us off the dock. They said we weren't supposed to stay the night there, and that we could have gotten badly damaged in the winds, since it was an exposed dock.

"Oh, and don't come back here on this dock, it is for loading and unloading only."

Thanks for the Cluebat, Officer. Been there, done that.

We got underway for the Medway, off to Chatham passing the old Naval Base.

As we made our way through the Medway River, we were joined by "Acquilion", owned and Skippered by a Gent by the name of **** Pryce. Very nice, big fella who had changed the traditional keel on his 32 foot boat to the new-fashioned "Winged Keel" favored by Large Yachts and America's Cup boats.

Pryce'y beat the pants off of us on our ten mile trip. They pulled in to the customs pier downtown, where we reloaded with beer and wine and some snacks.

Customs personnel were on us in a flash. I noticed a dearth of crew on "Acquilion", and pretty much the only people on the dock were Uniformed Customs officers, Scottish Lass and friend, Spousal Unit and myself.

There was a flurry of activity as the Officers walked below to take a look at our papers and boating documents.

I showed my Passport and Naval ID, and immediately the Customs dude wanted to see the "Original Importation Certificate".

The one I had given in Southampton.

And Thames Estuary, six months ago...

"No problem Officer, I happen to have the "Original" signed Certificate. here ya go."

This pink sheet was scrutinized by both officers and then questions were asked about our Young Lady Crew, whether they were Americans, too, and so forth.

"Oh no, not related, just guests from the Little Ship Club. Can't you hear their outrageous accents?"

They kept the Pink Sheet (This was getting to be very routine...) and told us to have a fine sail and to enjoy the Medway river. Very nice.

In fact, we were never bothered by the Thames Estuary/Medway Customs office, ever again. Over the next couple years, they would come flying up in a fast boat, see who we were, recognize us as friends and would wave, yell 'hello' and ask how we were doing. I think it was seeing the Navy ID and seeing I was still serving on Active Duty.

We sailed back to Queenborough and tied up to the Concrete Barge for the night.

The dinner menu was Mexican, with the star attraction being homemade fajitas. Veggie Fajitas for our guest.

I cook up the beans, onion and green peppers and salsa and offer them to our Lass... Who refused to eat the dish I had prepared.

"I'm a vegan, no meat, cheeses. I don't eat onions and peepers because they repeat on me."

I completely flipped out. This was a slap in my face and the implication was that I was a bad host.

The three of us (not the Wee Lass) enjoyed Steak Fajitas, and many bottles of beer and wine.

The Vegan didn't drink alcohol, either.

You see, I did a poor job of observing the nice young lady, since we had been at the Yacht Club the night before, and for that matter, we had stopped at Chatham and had sandwiches for lunch.

Her's was a Nutella sandwich, but I wasn't paying attention.

"Skipper and Crew's" had a policy of requiring expenses to be split between owners and guests, this was to make sure that Owners would keep offering berths to Guests. But I refused any cost sharing, especially from her.

We never expected any of our guests over the years to pay any expenses, just too embarrassing to ask.

"Just be sure to bring some Beer and Wine and maybe some special snackies", is what we would now ask.

What a dreadful trip. I felt really sorry for the young guests, but I was glad to get the experience of a different culture and was never a bad host again.

The Vegan didn't drink alcohol, either.

Yet another tale well told.

Annoy the Skipper to no end, and nothing more.

Some people just require more attention than others, and odd dietary requirements can be a good way to get that specialized treatment.