Keep on Keeping on

Work has come to a stop on the barco. We are now in an "AWP" status, (Awaiting Parts) so we will stand by to stand by. I hope we don't go into SPINTAC, as we got travelin' to do in the next week. (Can anyone remember what SPINTAC is? Five extra points if you do!)

Nick has cleaned up the work area so that we can use the Barco as a crash pad after dinner tonight. We just won't be getting underway anytime soon. I would rather everything be in a stopped motion state. Nick says he doesn't care for Kohler generators, but there is no way I can get a new generator, anytime soon.

I have been looking at runabouts and center console motorboats. I would like to get a 15 to 18 footer that looks and runs nicely. Our intent is to use it as a water taxi between the base and Pirates cove. Also, I would like to have something that can be transported easily that fits in tiny creeks and tributaries off of the St Johns.

Good value is the real desire, especially if it is under 4500 bucks. 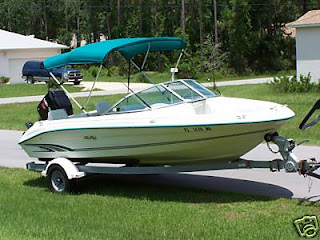 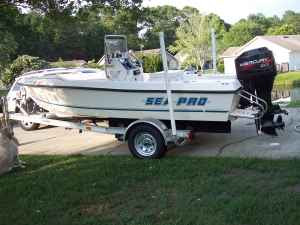 Both of these boats are a little more than 4500 bucks, but value is good.

Let me know if anyone knows of some stupendous boat deals!

Have a great weekend!
Posted by Barco Sin Vela II at 11:51 AM

LL; That was too soon. I didn't think you were an Airdale.

Naval acronyms ALWAYS make me smile, when I'm not scratching my head. While they may seem intuitive to those familiar with 'em, they're opaque as mud to the rest of the known world. Hanging out with former Squids (and SN2, for that matter) is an education, if nothing else. ;-)

I cheated, looked on Google. I was all set to say Special Parts Increase Normal Time And Cost. Glad I didn't guess!

Firefox; You deserve the five points for creativity!

It is "Special Interest Aircraft", an airplane that hasn't flown in thirty days due to maintenance needs. Very bad deal, since a message has to be sent to the Wing and to the regional Commander. Think of it as putting your self on report.