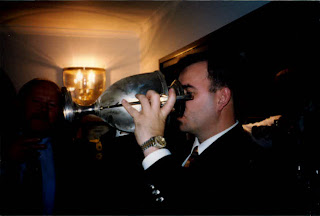 I just had to throw this one in. After the awards ceremony, a Loving Cup of champagne was passed to all of the awardees. Stop by the Little Ship Club in London. You won't regret it...

Nothing like reliving old times through photography. Which brings up some interesting things;

What is going to happen to the millions of great memories not placed on paper? Imean, think about it... We down load our digital cameras to our computers, printing out maybe a couple, the rest to be forgotten about in a folder.

Then you change computers. You don't down load your files to the new computer, because you always suspected that there was something dragging performance down. Hmm, maybe some spyware or whatever.

So the photo's of the past three years are lost forever, as far as most of us are concerned.

Something else; I don't film everything. Let's face it. If you are taking pictures or taping, you ain't involved in the action. That's why there will never be any evidence of some of my greatest moments on life. Bay of Biscay comes to mind. We weren't too sure we were going to survive our passage. So the camera stayed stowed, if for no other reason than we did not want people to see ourselves at our most panicked/frightened times.

But we sailed over 180 miles in a 28 hour period. It. Was. Effing. Glorious!. And not a picture to show us at our best. Just a small log entry.


I have been scanning in a pile of pic's from our active sailing years. It ain't easy, and it's time consuming. Also, I have lost physical prints over the last fifteen years. And scanned into the last computer, which sits alone in a back spare bedroom.

There will be a number of posts in the future, concerning some of the bigger voyages. The dog ate my homework!

Ok, my disorganization has ate my homework.

Pictures keep these blogs going. I really enjoy some of the art from my favorite bloggers, and even my notso favorites. I think of it as living vicariously through others. If only I could get my thoughts on the screen in some sort of intelligible way.

Maybe if I wasn't drinking champagne from an old silver tankard, which is probably coated in lead solder. Somebody has to do it.

This is a view from Wildebeest III, anchored in Anse a L'Ane, Fort de France, Martinique. 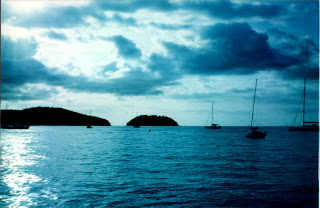 What is going to happen to the millions of great memories not placed on paper? Imean, think about it... We down load our digital cameras to our computers, printing out maybe a couple, the rest to be forgotten about in a folder.

My photos are the FIRST priority in moving files when I upgrade the box. I also back up all my photo directories to an outboard hard drive. And then there's Flickr and the like... so I don't think our digital images will be lost.

But I hear ya about the work involved in scanning old pics. And losing old photos, as well. About 80% of my photos went missing during my divorce and various living quarters relocations in the aftermath. I alternate between being SERIOUSLY pissed and attempts at being philosophical about the loss.