The French Wine Dinner was a success. Great food, fine wines and some new friends. We closed the joint down!

Saturday morning, Barco held reveille at 0600. We actually crawled out to meet the day at 0700, and we were away at 0750. There was ice on the front deck of the boat. Not a good start, but hey, gotta do it.

The morning sun was warm, and the skies were completely clear. We had a three hour trip ahead of us South, to Six Mile Creek. We had the entire river to ourselves, and it was a beautiful, uneventful trip to the Shands bridge.

Once clear of the bridge, we went to the next red mark and turned to the Southeast, lining up on a cell tower in the wilderness. It was tough to see the mouth of Six Mile creek, especially when there is a false entrance, which leads the hapless boater into a slough called aptly; Mud Alley.

We entered Six Mile and this is the chart plotter view of our position. Got to really appreciate technology: 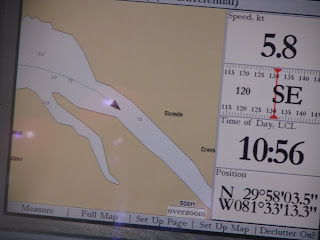 There were two bass boats doing the bass fishing thing, so I had to take care of not hitting lines. This is the view of the 1500 foot floating dock which is free to use as long as you dine at the Crabshack. 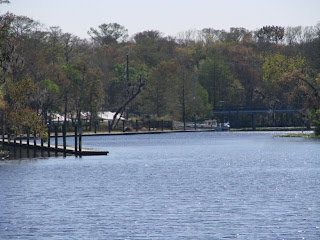 We tied up about halfway down the dock. We were invited to be a guest at the North Florida chapter of the Marine Trawler Owners Assn, (Formerly known as Marine TRADER Owners Assn, but Marine Traders are now a minority, thus the name change) Whatever.

I was presuming that every one would be on their boats, so I wanted to leave all the prime spots for members. Plus, I wanted to be able to beat a easy retreat. 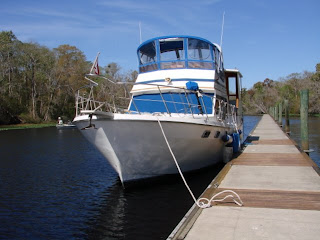 Almost immediately, we were visited by members who were roaming the dock. As it turns out, we were the only boat there for the meeting.

We were treated like celebrities, having the only boat present at a boating club's meeting. Sometimes ya gotta go with it. 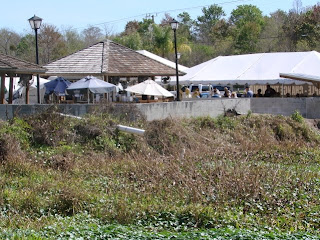 We thought we would only know two people at this gathering, since we weren't members, but there were about six people we knew from the past. One, Bruce F., used to be a neighbor of ours eight years ago. He is also a member of the Fleet AW association (Naval Aircrew) whom I had last seen in Pensacola, six years past.

Then a member came up to introduce himself and apologize for not bringing his own boat. He mentioned his name, Bob S. and went on to tell us about his boat. The name was familiar, so I told him that I was his boat insurance agent.

Bob lives in Welaka, has his 42 foot boat on a backyard dock. We have an invitation to raft up, sometime, and I can't wait to make that trip. Welaka is about sixty miles up the St Johns river, just before Lake George. Old Florida.

Bob and his First Mate 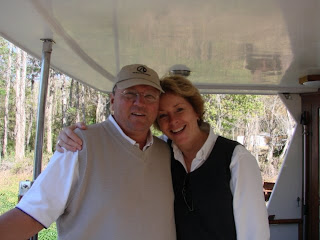 Right after I snapped that picture, a slow moving boat went by us and the Police looking skipper says, "Hello Mrs S, having a good day?".

First Mate looks down and says, "I'm getting old. He is the Police officer at the school I teach at. "He was in my English class when he was a teenager".

What a complete hoot!

Did I mention the ever-shrinking planet, lately? 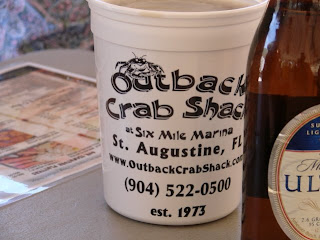 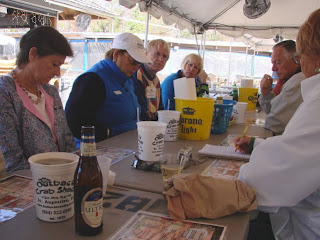 After a couple flagons of Icehouse, we decided to return to NAS Jax for part deux of our doubleheader. We expertly pulled off of the dock and snap rolled to port as we were backing down. I slipped the transmissions to forward while turning the helm right. We looked mahvelous. 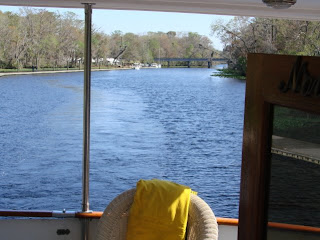 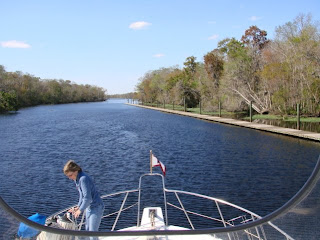 Yes, we paid our tab. 50 bucks for a couple of wines, two beers and a pound of crab legs for her, slab o' ribs for me.

Great pics and a great read, too!