Old Picture of the day 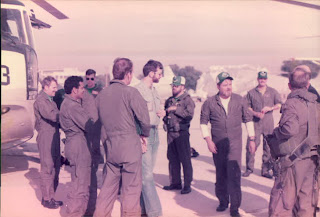 This was from around October of 1983/84. I only remember that we were in a hurry to get over to the 49er Club to give dancing girls our money and empty the bar of potent potables. I think we were doing a series of Torpedo drop exercises.

The guy who looks like he is ready to burst out of his flight suit is/was a mechanic by the name of Larry Nye. What a character. Funny as hell, and could drink until the beer was gone. He was my room mate in the barracks back at our homebase in Alameda. I thought he was old as hell, at the time. He had been in the Navy since 1964. He was prolly 38 at the time.

The cat with the red beard and green hat, trying to look serious is Brian. He was probably trying to keep an eye on his wayward junior Aircrewman, me. I was more than a handful, since I had not a care in the world other than getting hammered at the club and chasing girls. That's what you do when you are 21 or 22 and a Helicopter Antisubmarine Warfare/Search and Rescue Aircrewman. When not actually employed flying, we attempted to elude sobriety and clean living.

Brian is now the Vice Commodore of the local Navy Yacht Club. Funny how people who remember you from the murky past, and can tell stories that may be a little unflattering in the present. In Jacksonville. From over twenty five freakin' years ago. In California.

Keeps me grounded, I say. Best not be spoutin' lies about my rosy past. Twenty years of undetected crime they said, at my retirement ceremony.

Brian works for the State. He says that his tenure in the Navy, herding us cats and trying to keep the noise to a dull roar. All while trying to ensure we be safe aviation professionals, keeping all our fingers and toes intact while helping the Command keep its own helicopters out of the dirt, made him uniquely qualified. Yep, good experience to do what he do now.

Corrections or collections, not sure which.
Posted by Barco Sin Vela II at 7:01 AM

You guys had beards in that time frame? I thought facial hair went out with Zumwalt... unless you were underway?

Ah... 1984... the year before I retired. And I hear ya about your old shipmates keepin' ya straight. I've known one of the guys who reads EIP since 1968, and we were assigned to the same base three times between '68 and '70-something. Dan serves that purpose for me... so the chances are any war stories you might read at EIP are true. Dan would be in my shi'ite like white on rice if they weren't... ;-)

Yes, we had beards. I had one too, but I don't know where the other photos are, at this moment.

If I find any I will post. The reg's changed in January of 85, no more beards. This really upset many, but so it goes.

I liked having a beard because I could skip a day or 100 not shaving. Sensitive skin/laziness.

My last beard was about eight years ago, but Spousal Unit doesn't like it, she says it makes me look mean. Plus, there is more than a touch of gray.