A review which will not be on Amazon 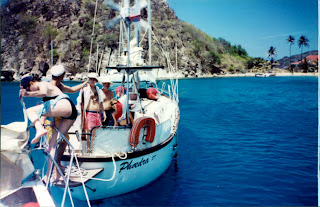 While visiting Guadeloupe we took daysail and are tied up to anchored boat in Ile de Saints, Guadeloupe

Last night was a sedate one, the Missus was out of town, and rather than be bored I made dinner and consumed mass quantities of Pabst (Three) and watched a couple of videos I recently purchased from Amazon.com.

I watched an amusing little video called, "Being Out There". It was produced by Lifecaptions in Marengo Iowa, and the website is interesting, I will explore, later. I went over there, and the story is a good one. I wish they would have included their journal, as a voice over for the video. Great stories!

But, there is no way I will ever get that one hour and twenty six minutes of my life back.

I made the purchase because the Amazon description made it sound like I would see some sailing, interspersed with some commentary and advice. What it was was about one-five minutes (15!) of boating with the rest of the time taken up by cryptic interviews with fellow cruisers at a party, and then expert discussions by couples sitting in front of a green screen. The music track was done by stringing some Eileen Quinn songs which told stories in verse about such diverse things as night sailing, anchoring and whatever else Eileen feels we need to know. It got that I would mute the video because the songs were not my cup of meat.

At least we weren't beat on the head with Margaritaville. (Really dislike hearing that old rhubarb)

Couldn't we have more of a variety of music? Marley? Barefoot Man, Pat Daily, Crosby Stills Nash? How about no music?

Back to the film.

The Male host seems to be a pretty smart guy, he describes a 32 foot Nicholson and the couple years spent getting it ready for the cruise. Pretty routine, brief commentary on getting ready and I could understand the desire to get the boat right. The Female host doesn't address any boat issues, or what she was doing to make the vessel ready for sea.

Nope. They show a canned scene of a setting sun and talk about heading for Cuba.

Ok, this could get better...

Nope. Just a couple scenes of downtown Havana and a voice over describing the wonderful, simple living people they saw on the trip. Then a couple of shabby video scenes of Marina Hemingway.

I was glad to see the vid of the Marina Hemingway, since I would like to visit there, myself.

Next thing you see is Luperon, Dominican Republic. Again, talking glowingly about the locals and gushing about how poor yet proud they were. Ugg. Getting worse.

Wildebeest III off of Dominican Republic 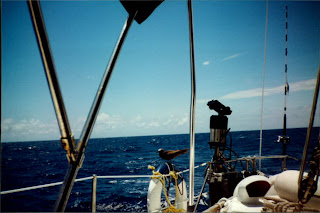 I will spare you the rest. I admire the video makers for going out and cruising, and caring enough to share their video with the rest of us. They have a great story to share, but it didn't come though on video.

Less talk about the dead animal that kept floating by your boat in Georgetown. This is almost a third world harbor, expect there to be less public services than Tampa Bay.

More talk on equipment would be nice. Everyone has opinions on boat gear, and I was really interested in seeing what gear they had, and what they found to be unnecessary.

Overall; Thumbs down. Good effort but not enough filling for the sammich. Less music and more sailing, please. Maybe next video by these nice folks will be better. Their blog sure is. 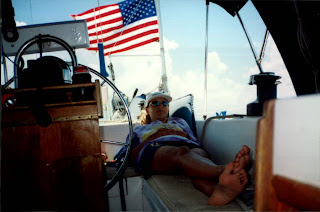 The other video? "End of the Century" Sad film about a Rock and Roll band that never got the commercial recognition they deserved. It ROCKED!
Posted by Barco Sin Vela II at 7:44 AM

I think your review would fit quite nicely on Amazon... I've definitely read worse.

That first picture... the water is just so danged BLUE. I stared at it for quite a while.

I just might have to rent that Ramones vid. I don't have a Netflix account, but that vid is as good a reason to get one as I've ever seen.

Hey Buck,
Thanks for gracing us, yet again!

Yes, Ile De Saints was one of the best sailing destinations I have ever visited. Period. The azure water was clear and indeed, vivid. This is due to clarity and white sand.

Pays to actually be there!

I will do a page on that visit, later.